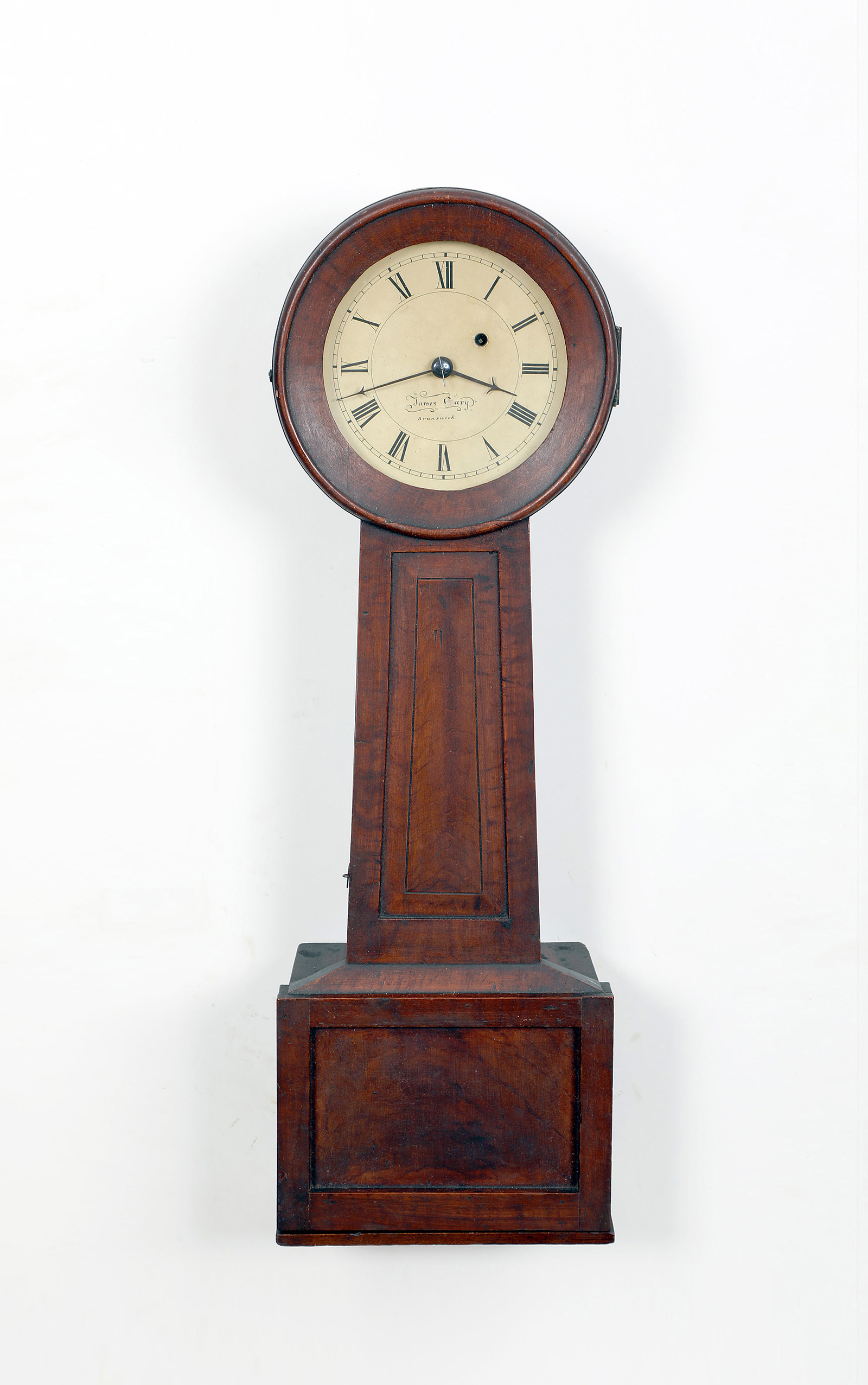 click image for full gallery...
Rare banjo clock with a one-piece bezel/throat/box all integrated into a hinged door, Maine, early 1830s. Faux-grained Northern White Pine with a wonderful original patina. The movement is a brass eight day timepiece. It incorporates a "dish dial" common in Mass. shelf clocks and some Mirror Timepieces, very unusual in a banjo clock. The dial, while relined, is original to this case as there are only 2 mounting holes in the dial that exactly match the holes in the case. Overall dimensions 32 X 10 X 5 inches. Numerals and signature have been restored. The dial fits the case in that the two existing holes match the mounting holes, but the dial may have come from another clock as there are cutoff mounting dial pillars on the back; it is thought that Cary may have altered an unused pillared Mirror Clock dial when making this clock.

In 1805, when he was just 15 year old, James Jr. served as an apprentice to Robert Eastman in Belfast, Maine. With Eastman, and possibly another clock-maker named Bisbee, Cary learned the trade of making clocks. A year later, Eastman moved to Brunswick and there Cary later became his partner, forming the business Eastman & Cary. Wheeler & Wheeler states that in 1809, when Cary was just 19, he bought out Eastman's share of the business and owned the clock-making enterprise outright. Interestingly, at first Cary ran his Brunswick business out of the same house he was born in, at the corner of Maine and Mason Streets. He remained at this location even after the building burned down in 1853, rebuilding on the site and working there until his death in 1865.

Cary was one of Brunswick's most prominent citizens. In business, he never limited himself to clock-making, and also took on the titles gunsmith (like his father), goldsmith and silversmith. Cary even sold medicine out of his shop. He was also very involved in the local community, serving as a member of the local Masonic fraternity and as vice-president of both the Nucleus Club and the Brunswick & Topsham Athenaeum. Cary attended the First Parish Church with his wife and was, like many of his neighbors, at first a Whig and later a Republican.

James Cary, Jr. died in Brunswick on August 25, 1865 at the age of 75. Though his obituary does not list a cause of death, it does state that "for a man of his years, borne down by disease, he was one of the most remarkable we ever knew." 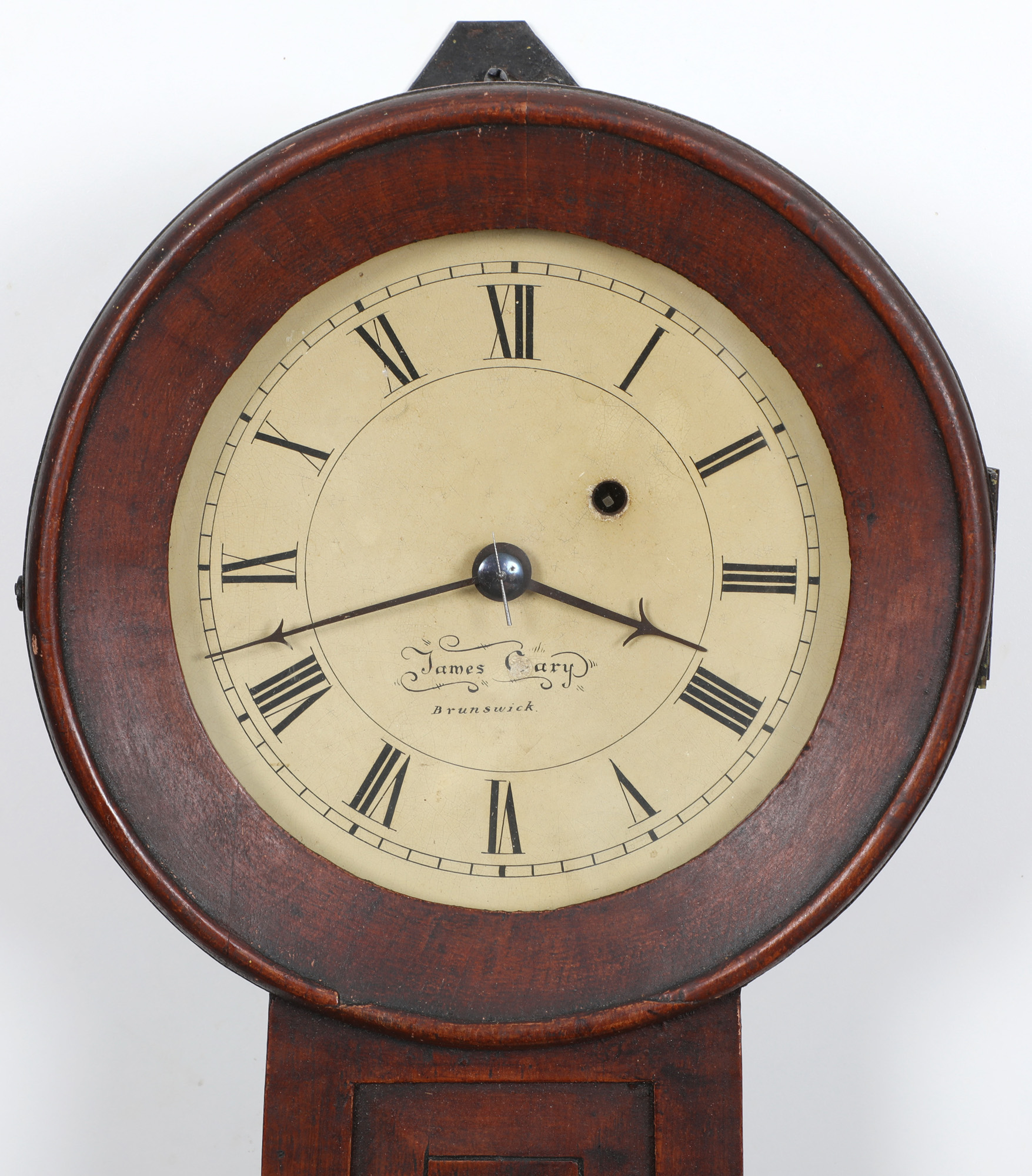 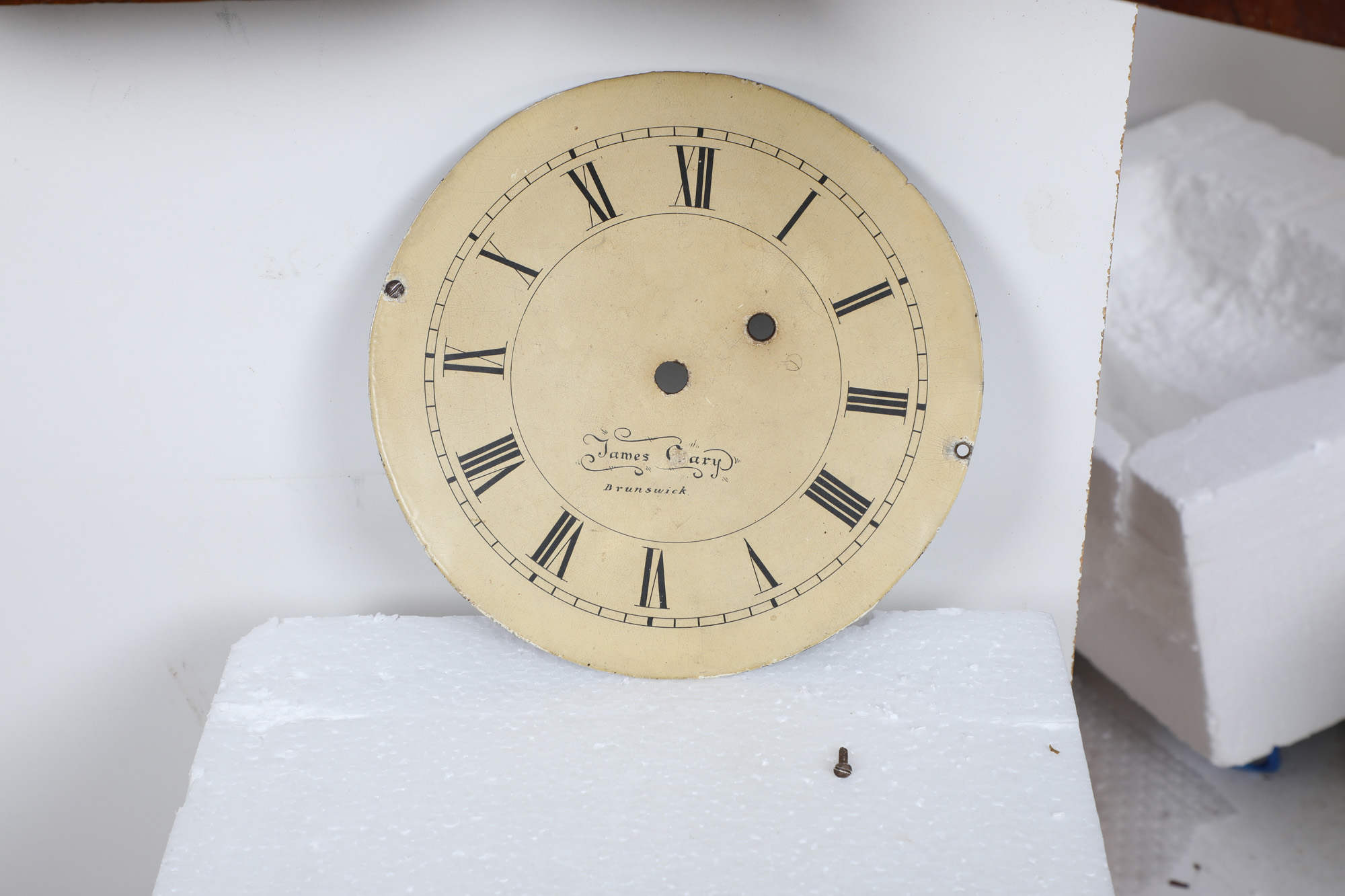 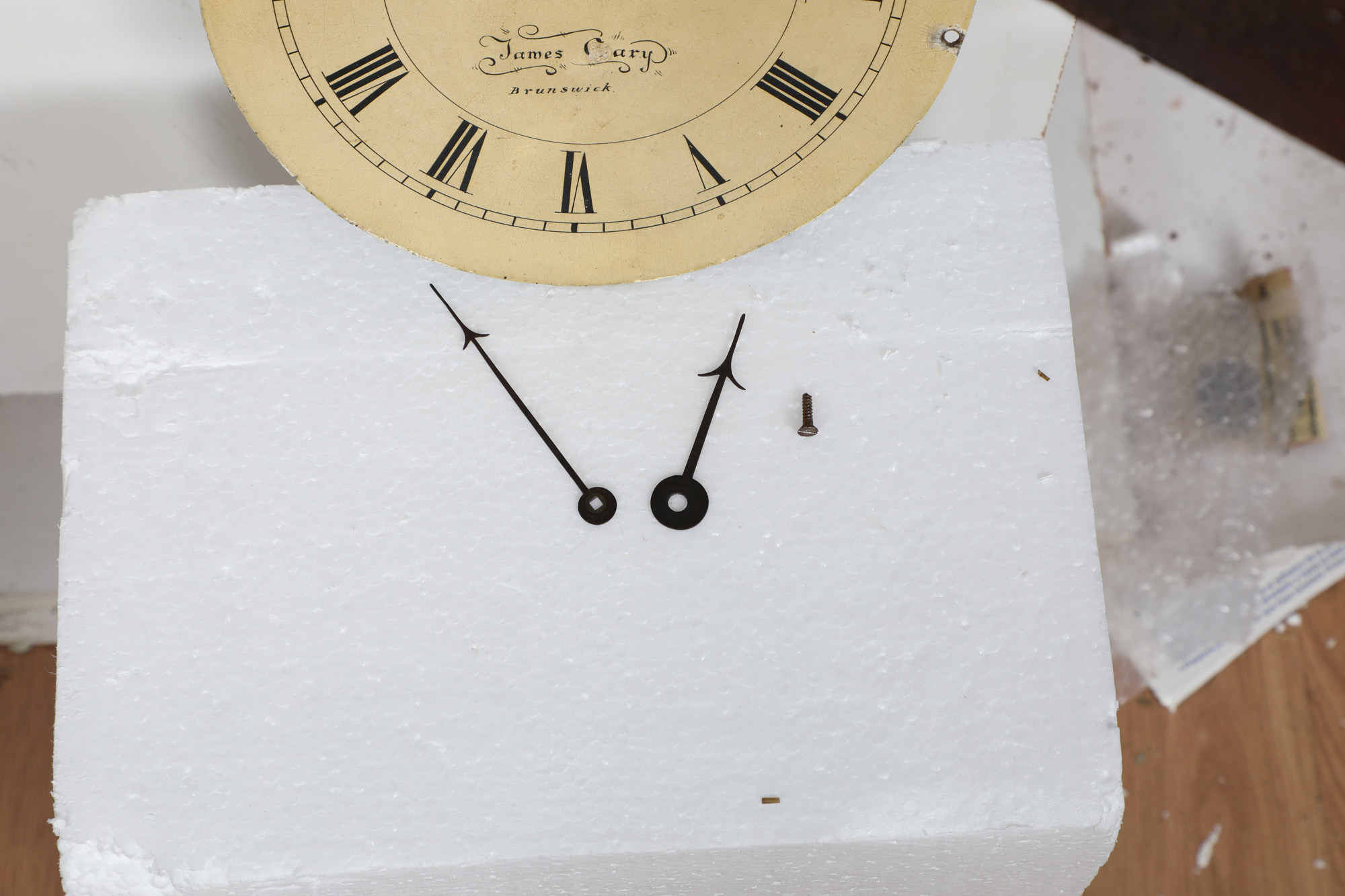 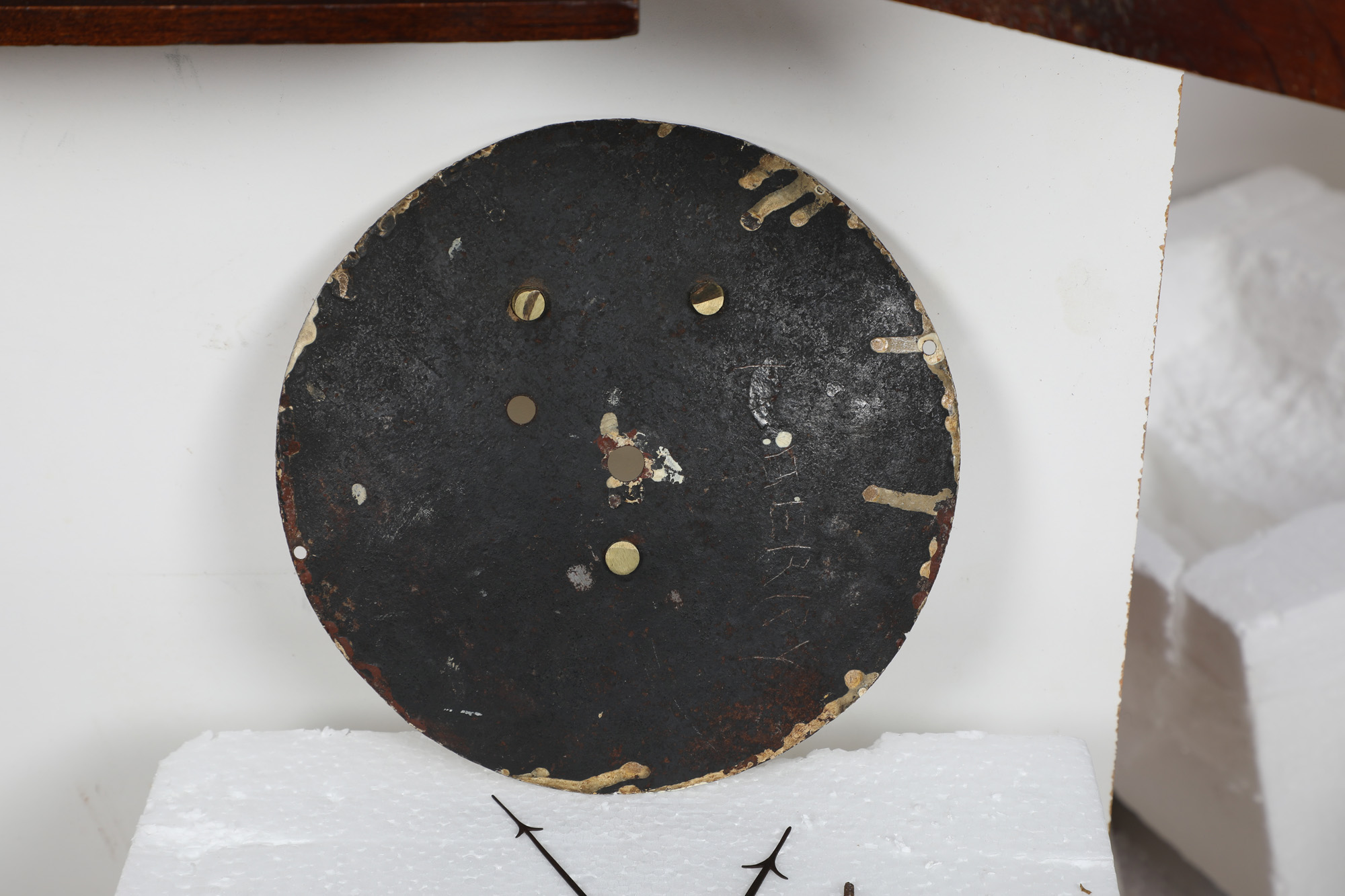 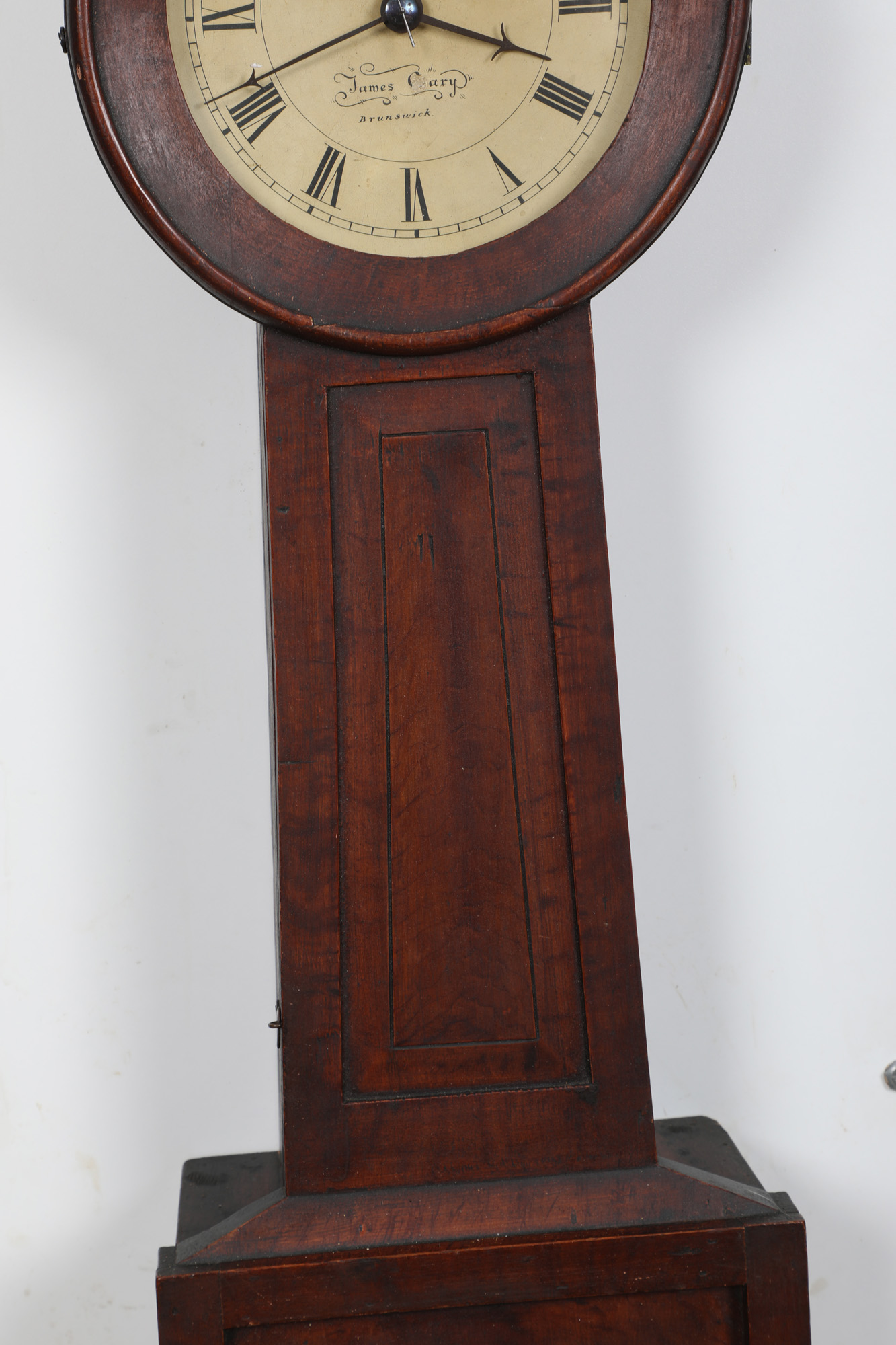 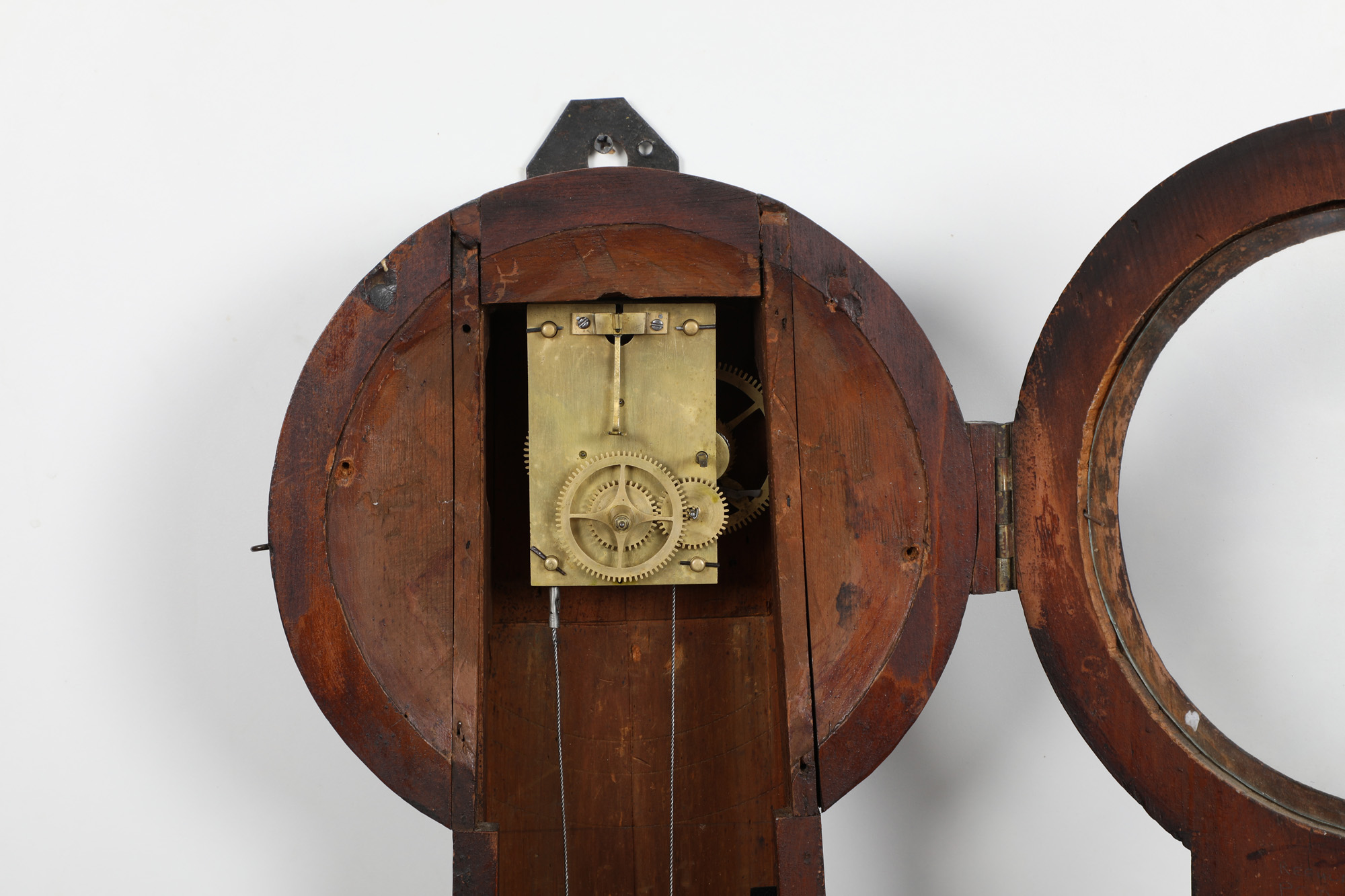 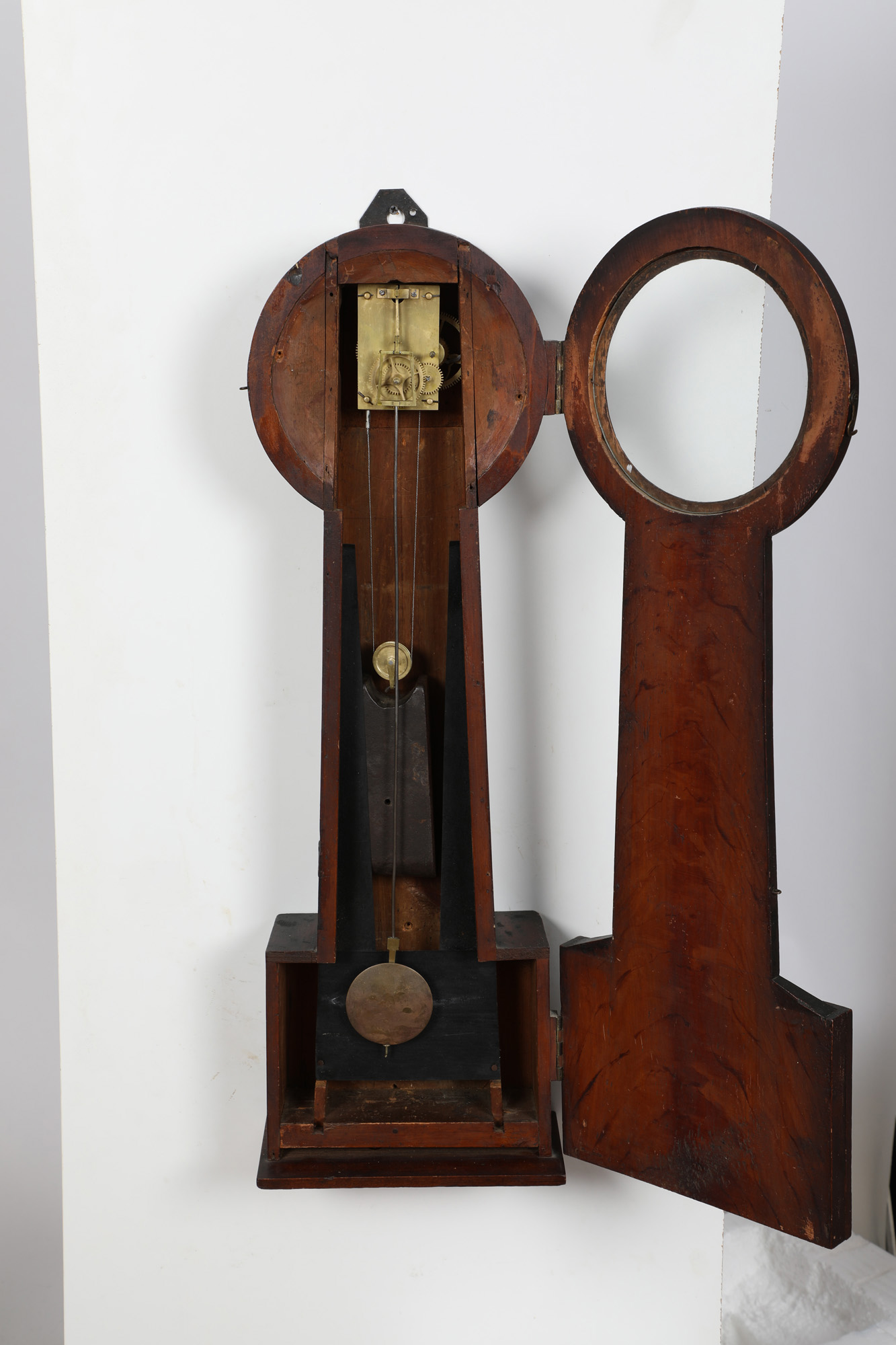 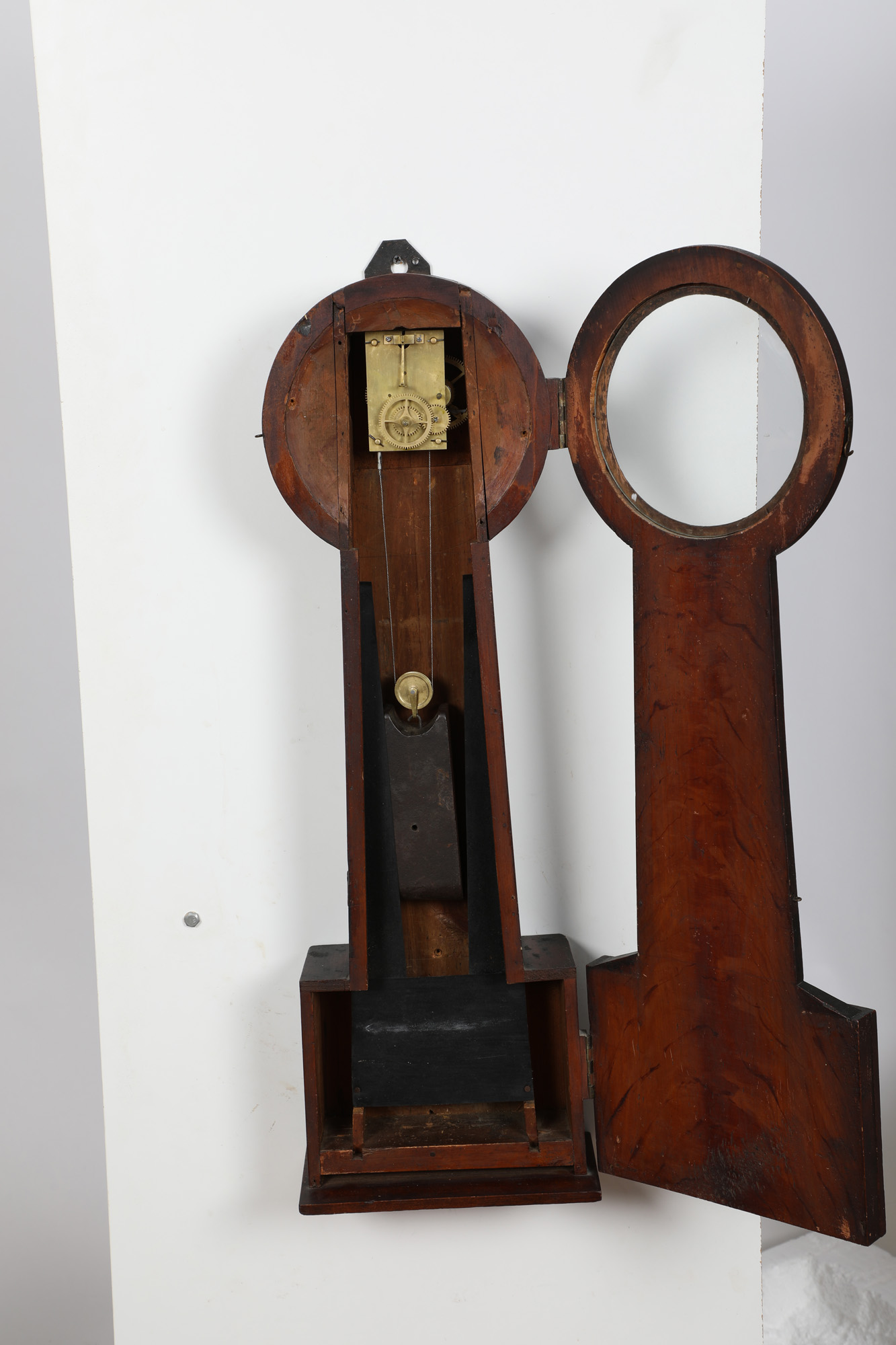 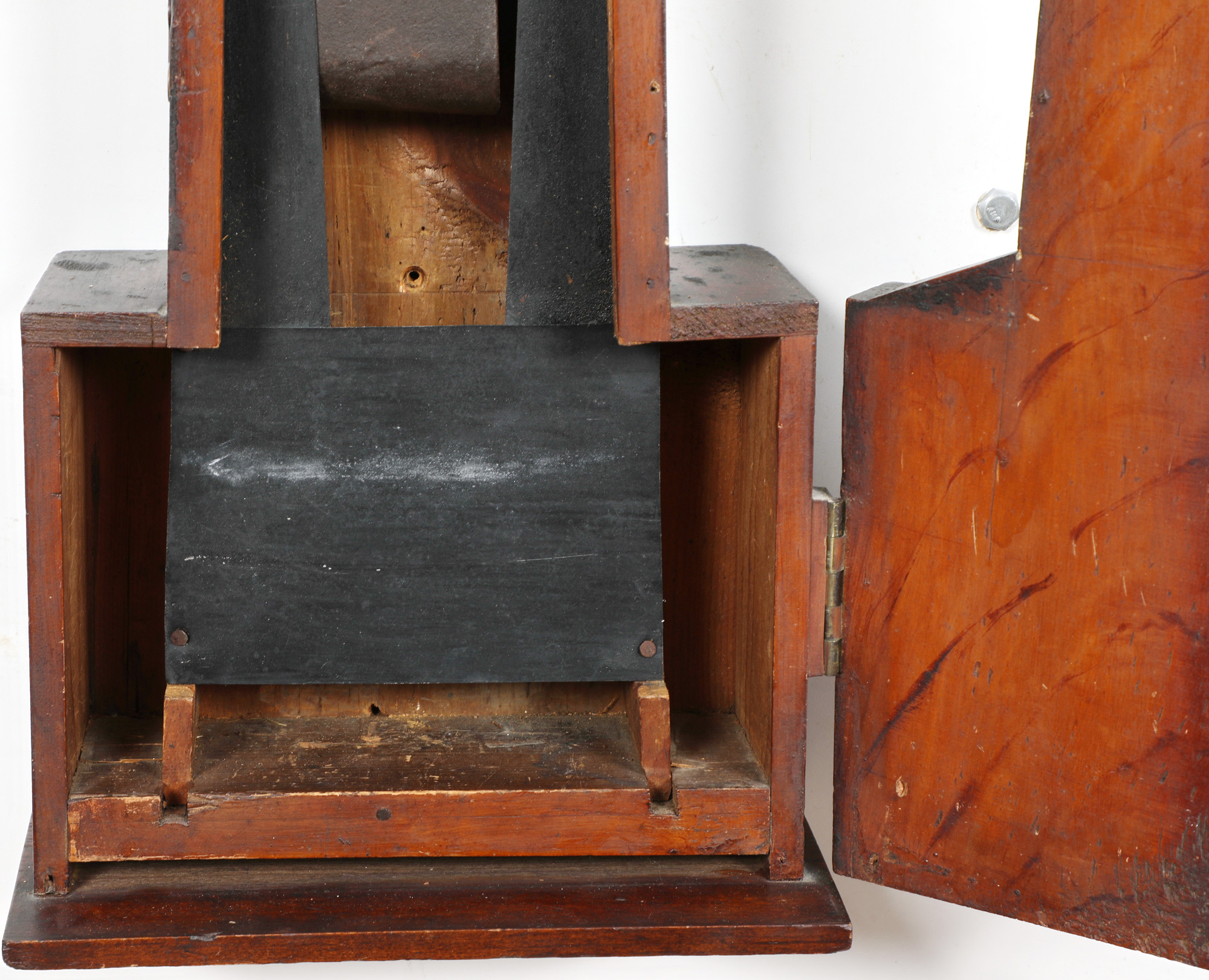 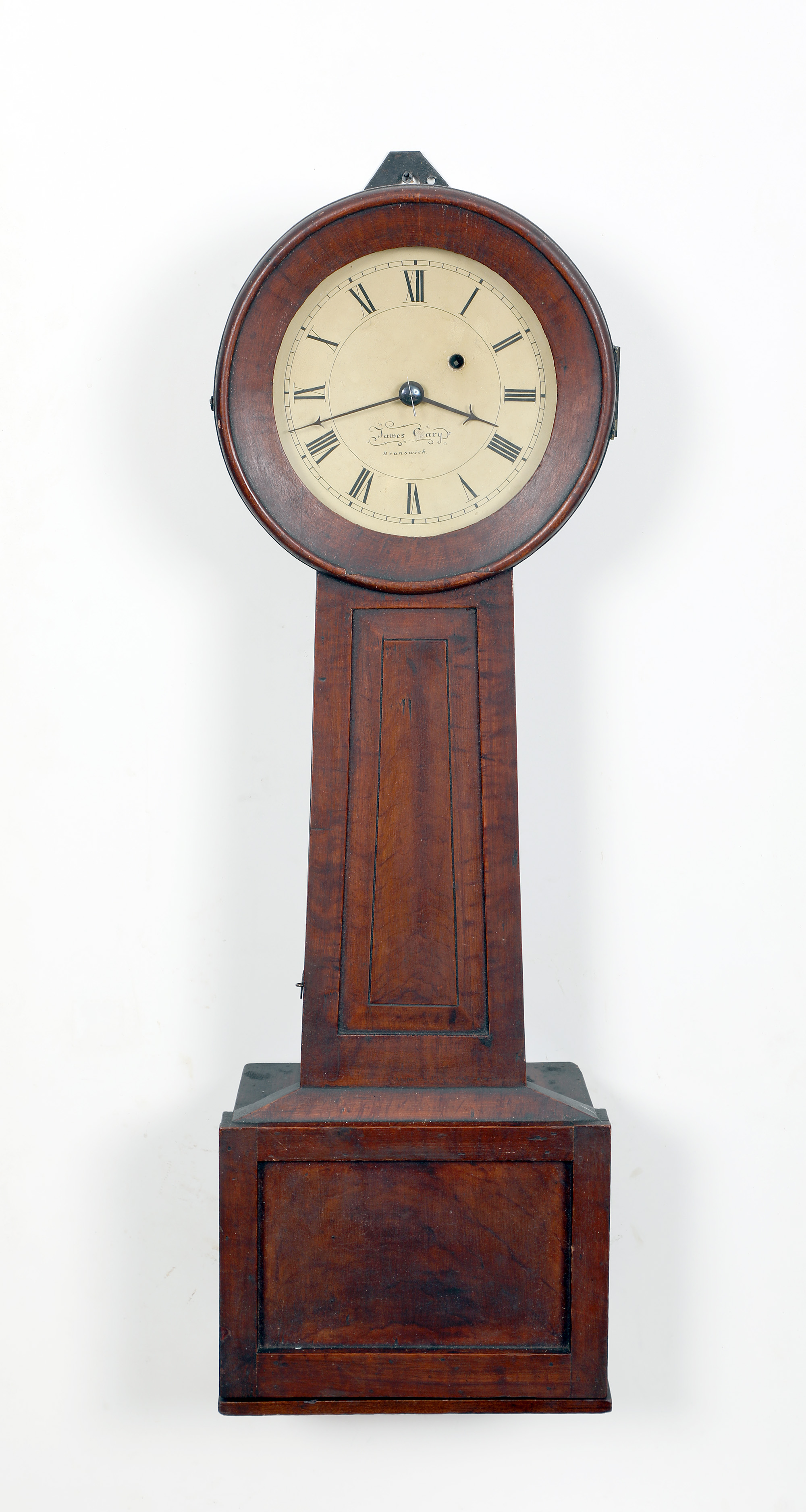