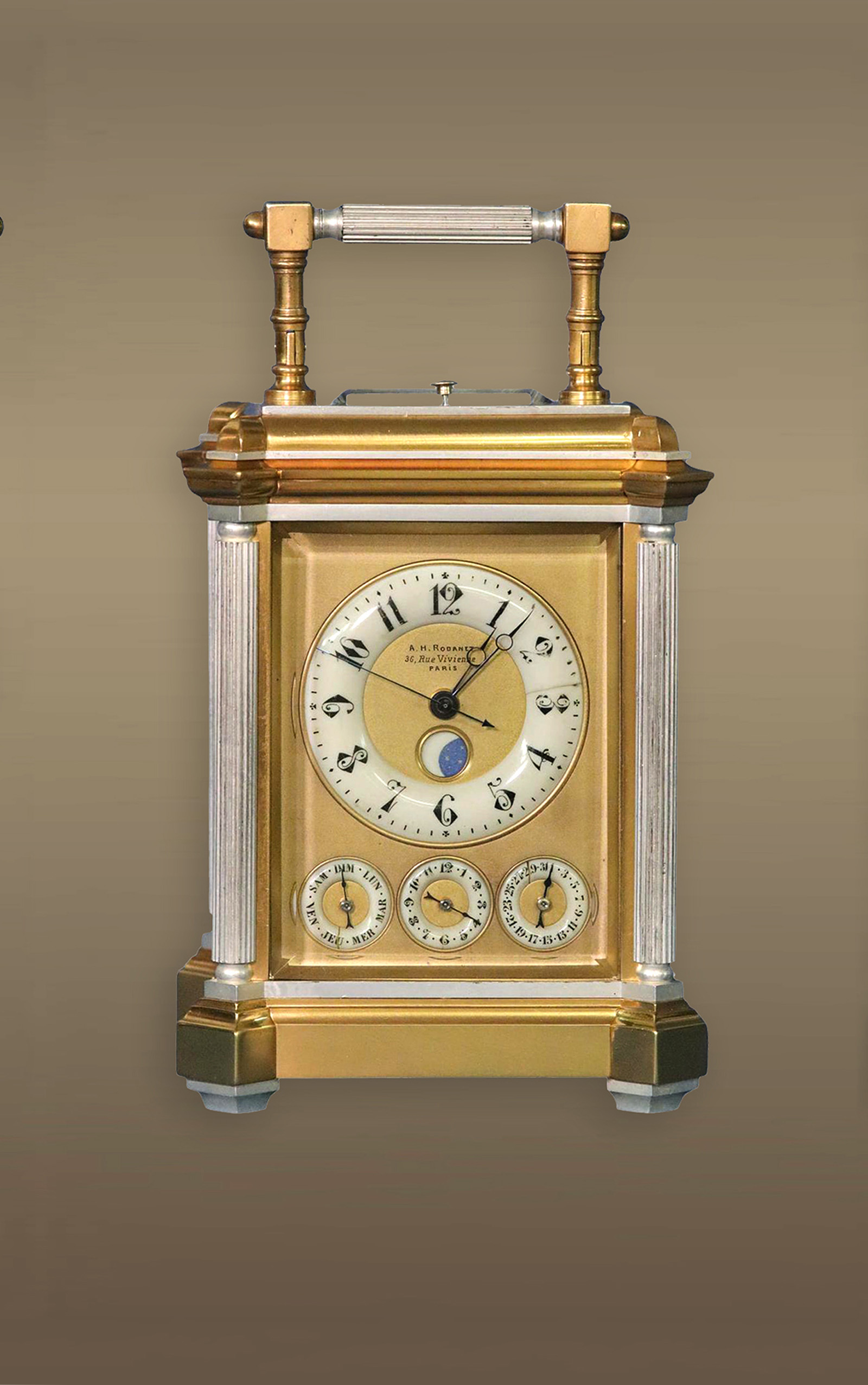 Case: The silvered and gilt-bronze case has canted corners with reeded columns, a hinged handle and beveled glasses to 5 sides.

Dial: The dial has porcelain chapter rings with Arabic numbers for the hours, alarm and date, the days of the week in French, and steel-cut hands including the sweep second hand. The center of the hour chapter has an aperture for the moon-dial and is signed by the retailer, 'A.H. Rodanet, 36 Rue Vivienne, Paris'.

Movement: The time and strike eight-day grand-sonnerie movement is wound and set off the backplate, has all the indications in French, is stamped by the retailer, 'A.H. Rodanet, Paris', is numbered 29398 curved around the lower post and still retains the original damascened high quality platform with a lever escapement. The strike sequences and the moon dial are adjusted by levers out the bottom.

Notes: Rodanet made chronometers and also sold a range of high quality clocks and watches from leading Swiss manufacturers such as Patek. Auguste Hilaire Rodanet (1837-1907) was the son of Julien Hilaire Rodanet and the uncle of Henri Rodanet. Auguste was born on June 5, 1837 in Rochefort Sur Mer and was a watchmaker and retailer as well as Patek Philippe s representative in France. In 1858 he won a silver medal for a chronometer at the age of 21. In 1886/1887 Rodanet wrote the book "L'horlogerie astronomique et civile. Ses usages – ses progrès – son enseignement à Paris", which was published in 1903. In 1890 he founded the brand "Horlogerie Rodanet de Paris". Auguste Hilaire Rodanet was mayor of the 2nd Arrondissement in Paris from 1904 to 1907 and president of the "Ecole d'Horlogerie". Rodanet was also received into the Legion of Honour. He died 70 years old in 1907.

Rodanet created the Paris School of Watchmaking to globalize the training of young watchmakers and get them out of specialties that were too narrow to guarantee them a future. He observed that young people who leave apprenticeships and schools have only one specialty, in particular pivoting or finishing, and do not know all the techniques necessary to manufacture a movement. The school had four workshops, three classrooms, an amphitheater for technical demonstrations, an important museum-library, a boarding school and the premises necessary for the various departments of the school's management and administration. Subject to success in the entrance examination, the duration of apprenticeship was four years. Each year, the graduating students took part in general competitions with a Jury made up of watchmakers and scholars. Supported by the greatest personalities of the time with a powerful patronage committee, the Paris School of Watchmaking enjoyed unequaled fame and prestige, forming a breeding ground for first-rate master watchmakers.

A skilful negotiator, Rodanet knew how to frequent ministerial cabinets to bring his battles to promote watchmaking to successful conclusions. Few watchmakers, alongside their profession, have had the ability to develop their passion and their activity by using the political environment to support their objectives. He was an ambitious merchant and talented watchmaker who did not hesitate to sit at the workbench and behind a drawing board, inventing a straight-line lever escapement and a lateral lever escapement without equidistant rests in 1887. In 1890, he registered the trademark "HORLOGERIE RODANET de PARIS " and died at the age of 70 in 1907. Undoubtedly his privileged link with Patek Philippe made it possible in recent years to identify this watchmaker by seeing his surname associated with the name of Patek Philippe.

It must be said that at the time when Rodanet distributed its watches manufactured by Patek Phillippe, the quality of watches simply signed Rodanet easily stood comparison with watches from the Patek factory. Rodanet, in fact, used high-end calibers at LeCoultre in particular and thus sold chronometers with their service report. The parts were expensive, more expensive at Rodanet than at other retailers for a quality always pushed to the maximum; Rodanet finished its movements with the greatest care. It is said that the man could not stand a piece being crooked or poorly highlighted. The simple fact of being sold at Rodanet was to classify it in the top of the range and as such allowed it to benefit from preferential treatment. Long before his competitors, he understood that the better the piece was treated at the time of its sale, the more the customer felt the importance that linked his watch purchase. Rodanet's clientele wanted to be high-flying and nothing was left to chance that could make them angry or uncomfortable. Buying from Rodanet offered the customer a ceremonial that he did not have elsewhere. We see passing through the sales of Rodanet pieces that often only talk about Patek Philippe.


These blancs-roulants consisted of the plates, pillars, spring barrels, wheels and pinions polished and planted to their proper depth. In the more complicated movements they also supplied the striking and repeating works behind the dial. Dials, hands, gongs or bells, and escapements were not included, and the Paris finisher usually had to procure and assemble these parts as well as casing the movement.


from leigh extence, who used to work with derek roberts: a quick initial look shows a typical Drocourt movement with a typical Drocourt case style, dial and dial layout. Drocourt 25670 has a very similar layout with the sweep seconds, moon aperture and three subsidiary dials. Out of interest, I was offered this clock by Hank Ferrer and studied it then. I see from my notes that I firmly attributed it to Drocourt, but I'll go through my emails etc to and from him and see what I said at the time. If I recall I gave him the approximate date of manufacture as 1895 which is certainly within a year either side. Having looked at my emails from Hank Ferrer it would seem that he was unaware that the carriage clock was attributed to Drocourt and gave me very few details apart from a couple of images and the serial number. As to the similar one numbered 25760 (I incorrectly put it as 25670 in my email to you), I don't seem to have an image at hand. It belonged to a friend of mine in America, Larry Dalton, who passed away a while ago. It may be that he told me about the clock, but didn't supply actual images, or I have since seen it in auction as a number of his clocks were dispossed of by his wife Bella. My written notes suggest that it is very similar to yours, so I'll keep looking into this and see if I can find out more. It may well have appeared in a book that Bella put together showcasing Larry's collection, but as yet I don't have a copy. One is on its way.


some info from the allix book:

m. pitou (rue debelleyme) was born in 1890 and in 1970 was still finishing blancs roulants he had acquired fifty years previous when he had acquired the remaining stock and materials of Jacot, where he had worked. according to pitou, Jacot obtained his best blancs roulants (grande sonniere, for instance) from Baveux in Saint-Nicholas, but also bought more ordinary roulants from Japy. The Baveux roughs were of a superior quality, and they were thus no doubt favoured by Jacot for his best clocks. pitou believed that Baveux never finished their own blancs roulants, and confirmed that Saint-Nicolas makers as a whole did not finish their carriage clocks.... with the notable exceptions of Couaillet, Duverdrey and Bloquel. There would seem to be no doubt that Jacot finished clocks for A.H. Rodanet, Paul Garnier, L. Leroy & Cie, etc. pitou was the last finisher of carriage clocks in paris. for the last thirty years of his business life he worked almost exclusively for the house of breguet.

- by 1878 output had increased to around 400,000, with about 18,000 platform escapements made near Montbeliard, many of which woud have found their way to Paris and Saint-Nicolas

- "the four leading Paris producers of carriage clocks towards the end of the 19th century were Jacot, Drocourt, Margaine and L. Leroy & Cie. On the whole, Jacot tended to make superb and fairly complicated clocks of restrained elegance. Grocourt and Margaine favoured florid designs with much use of engraved cases and decorative panels. L. Leroy & Cie regularly used both plain and decorative cases, while mechanically their clocks show wide variation in both design and origin. 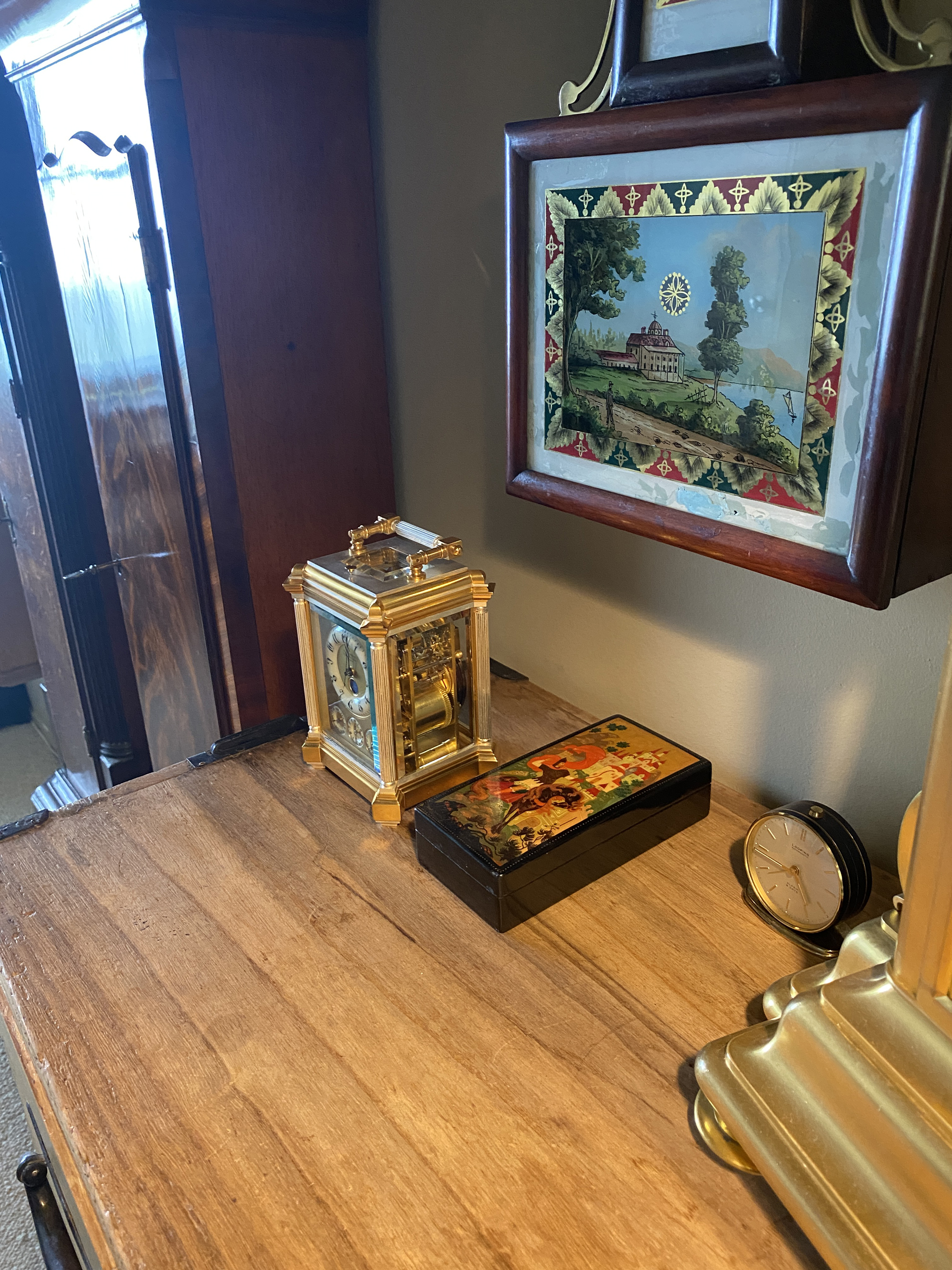 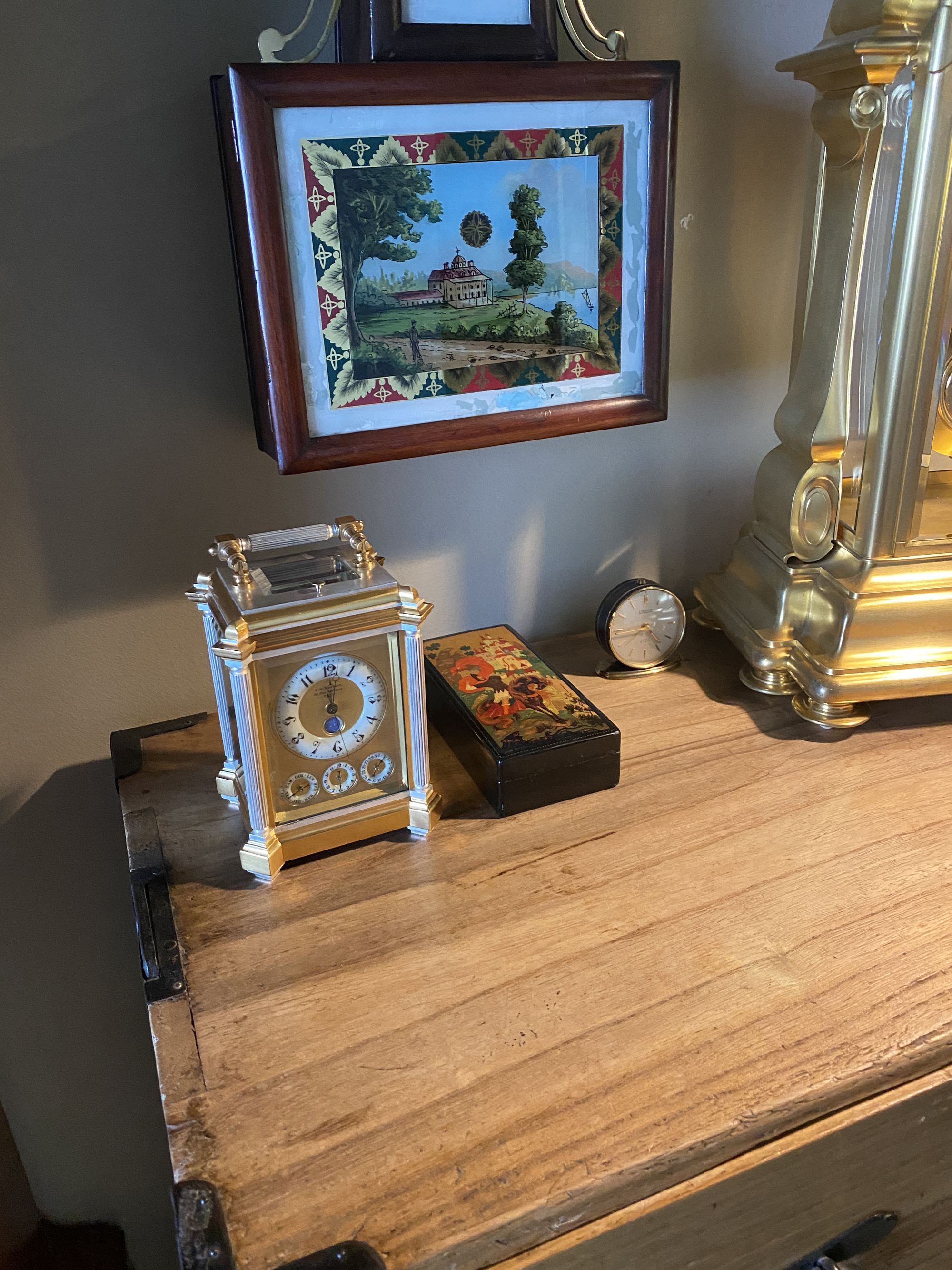 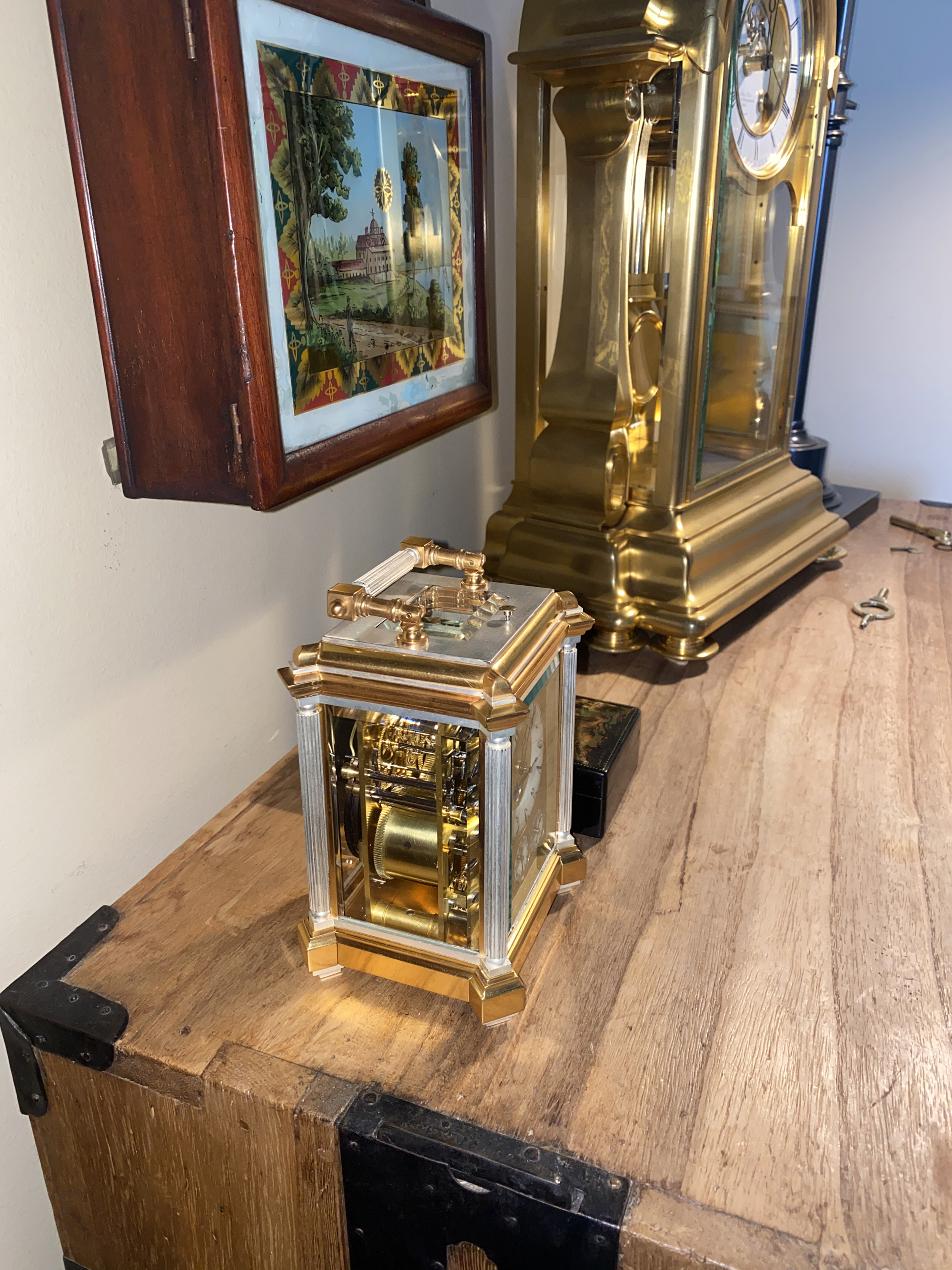 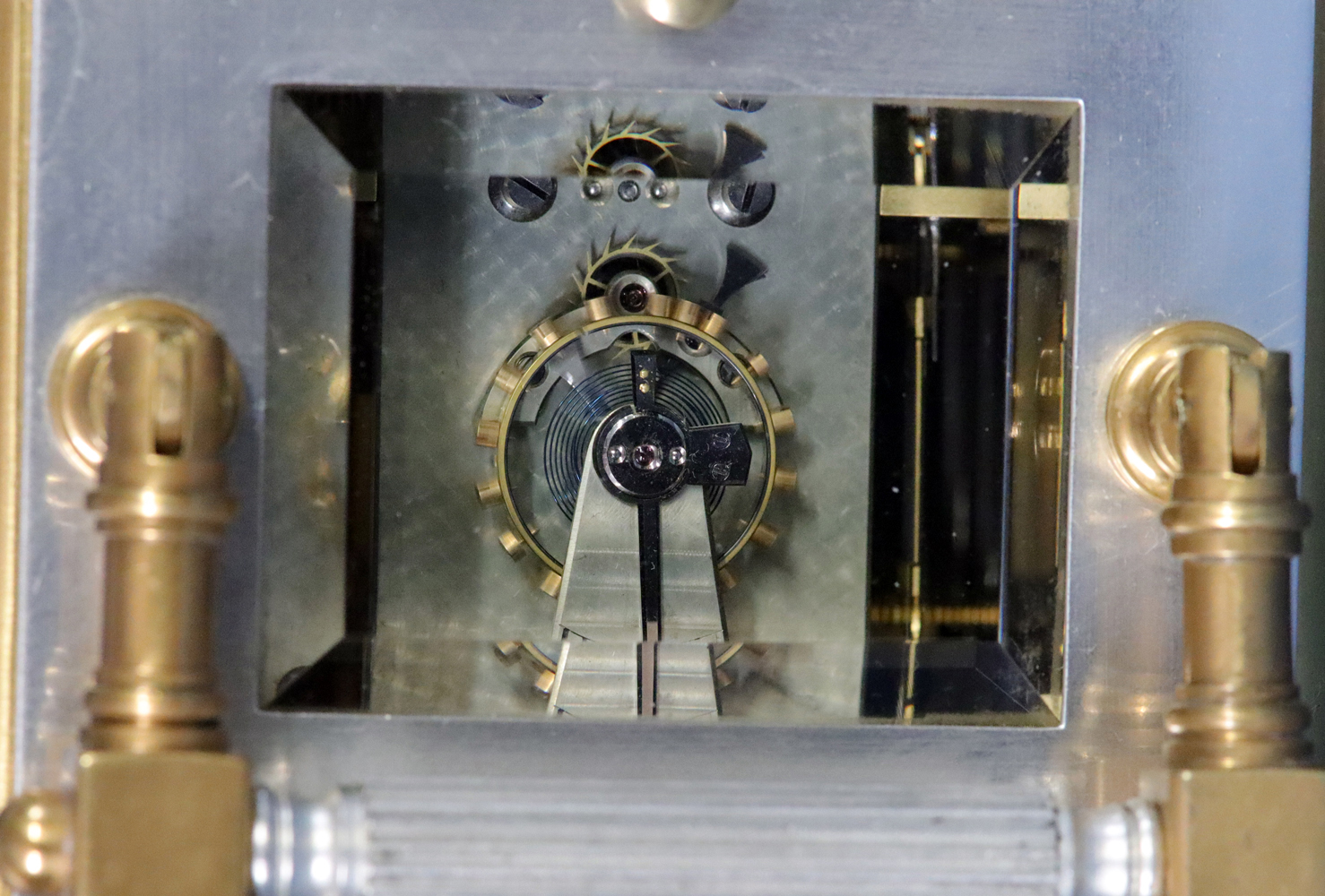 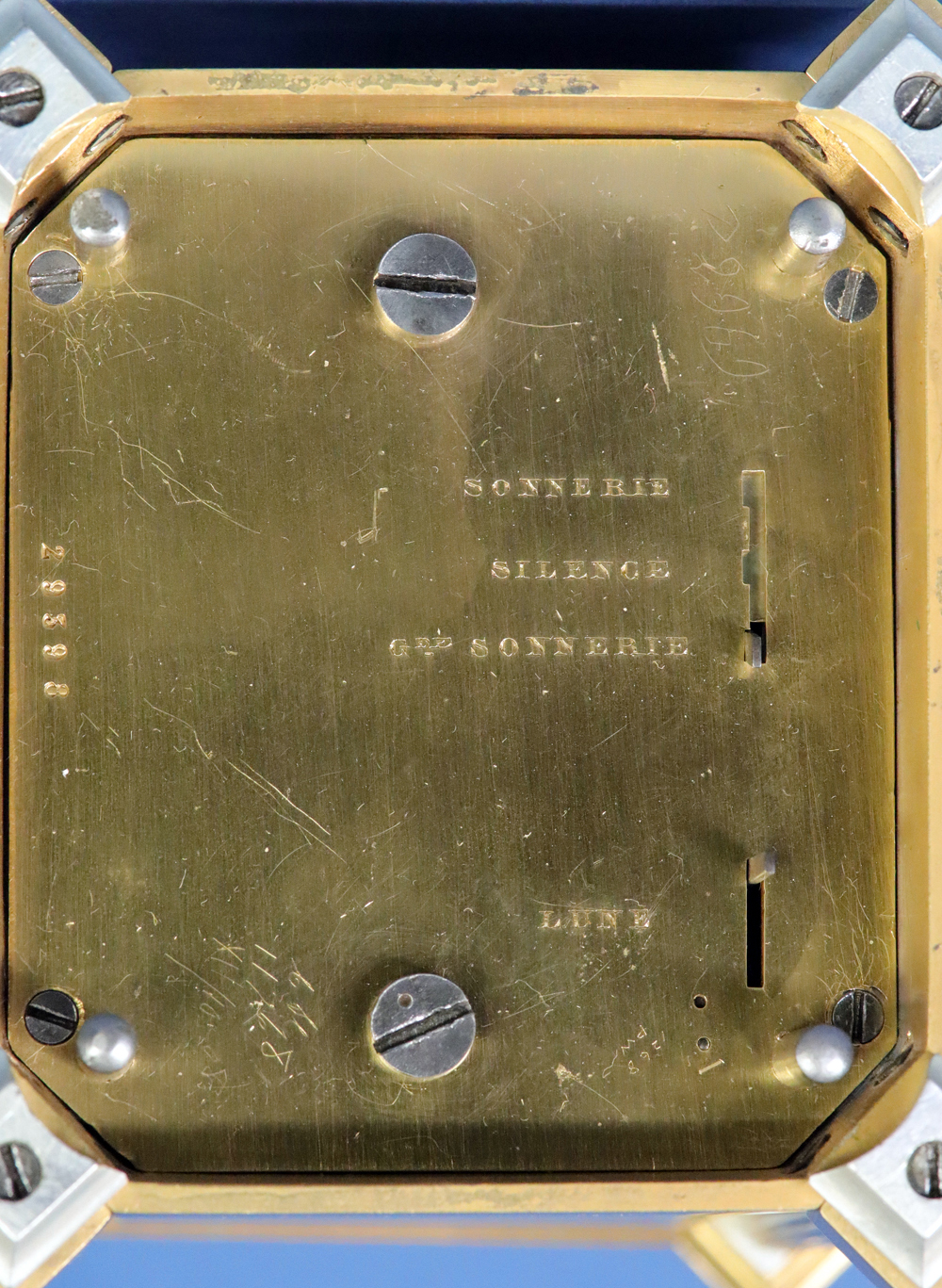 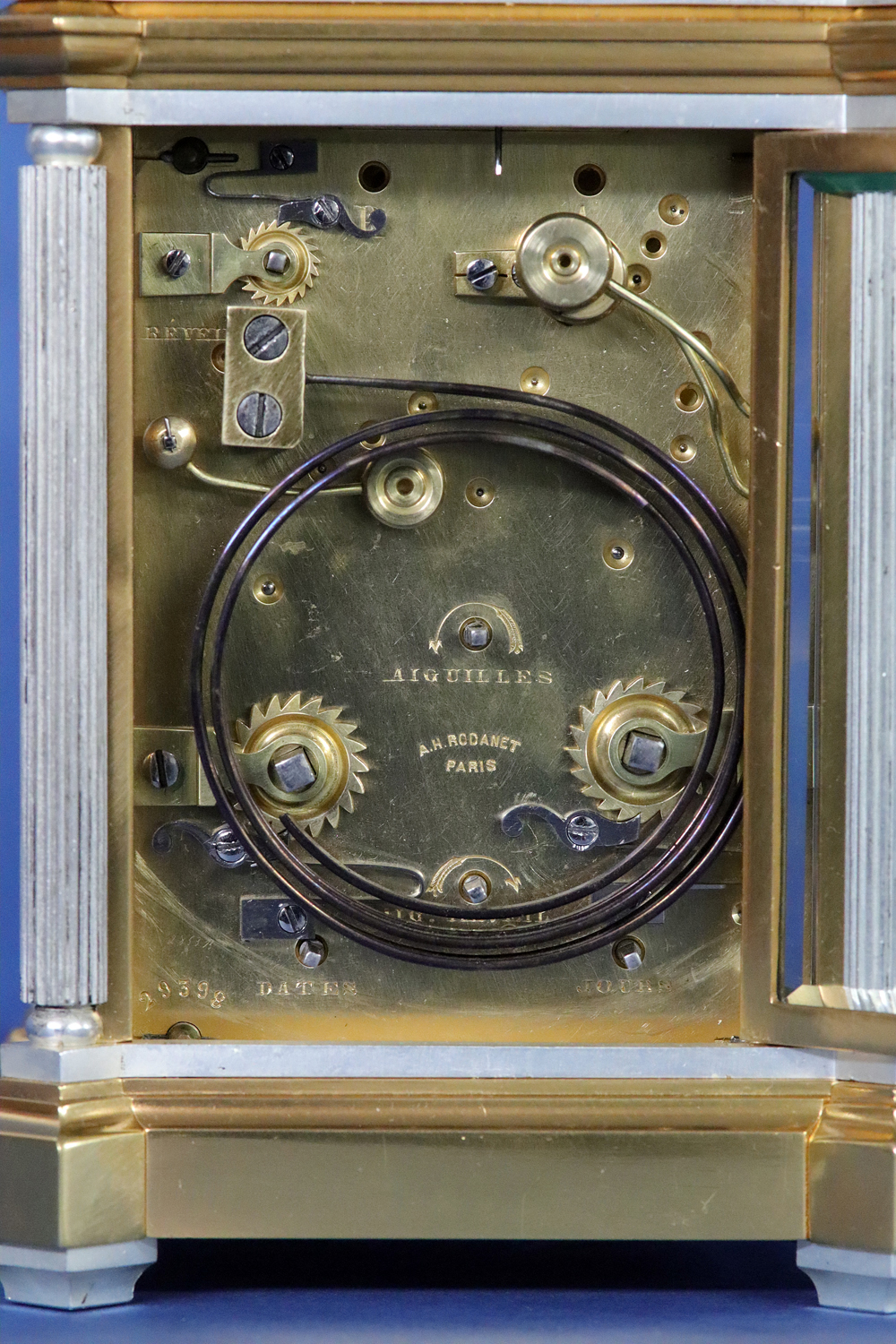 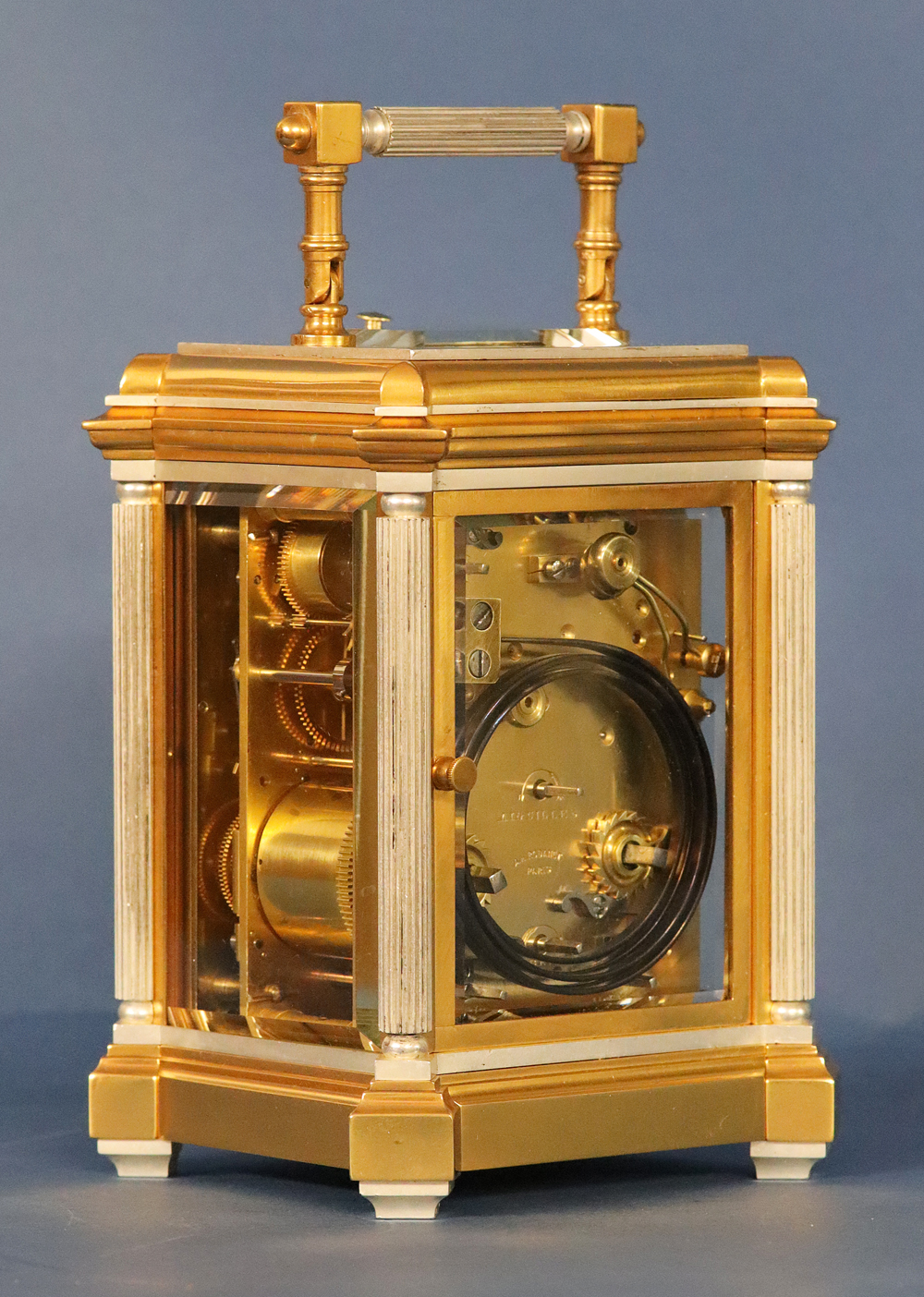 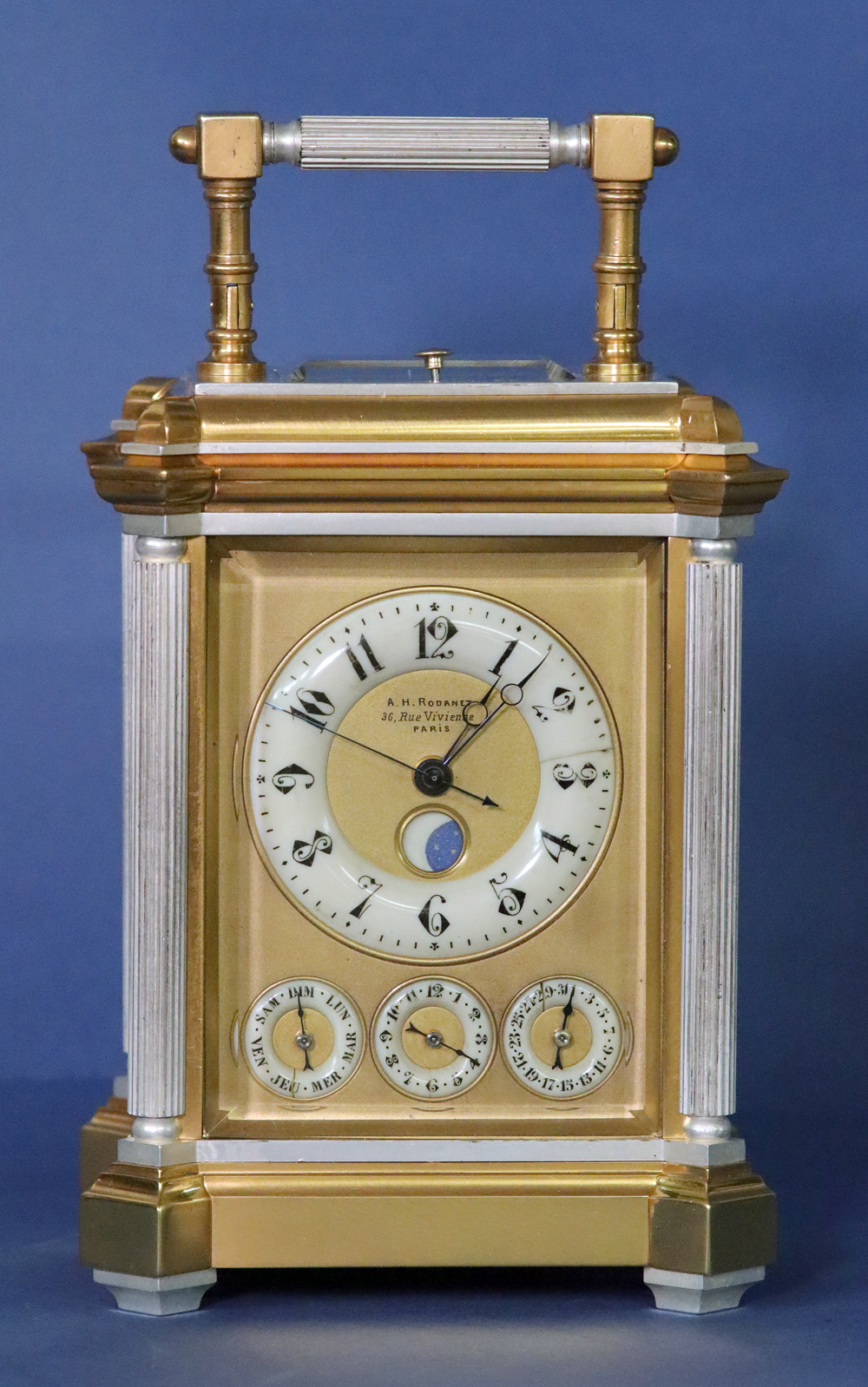 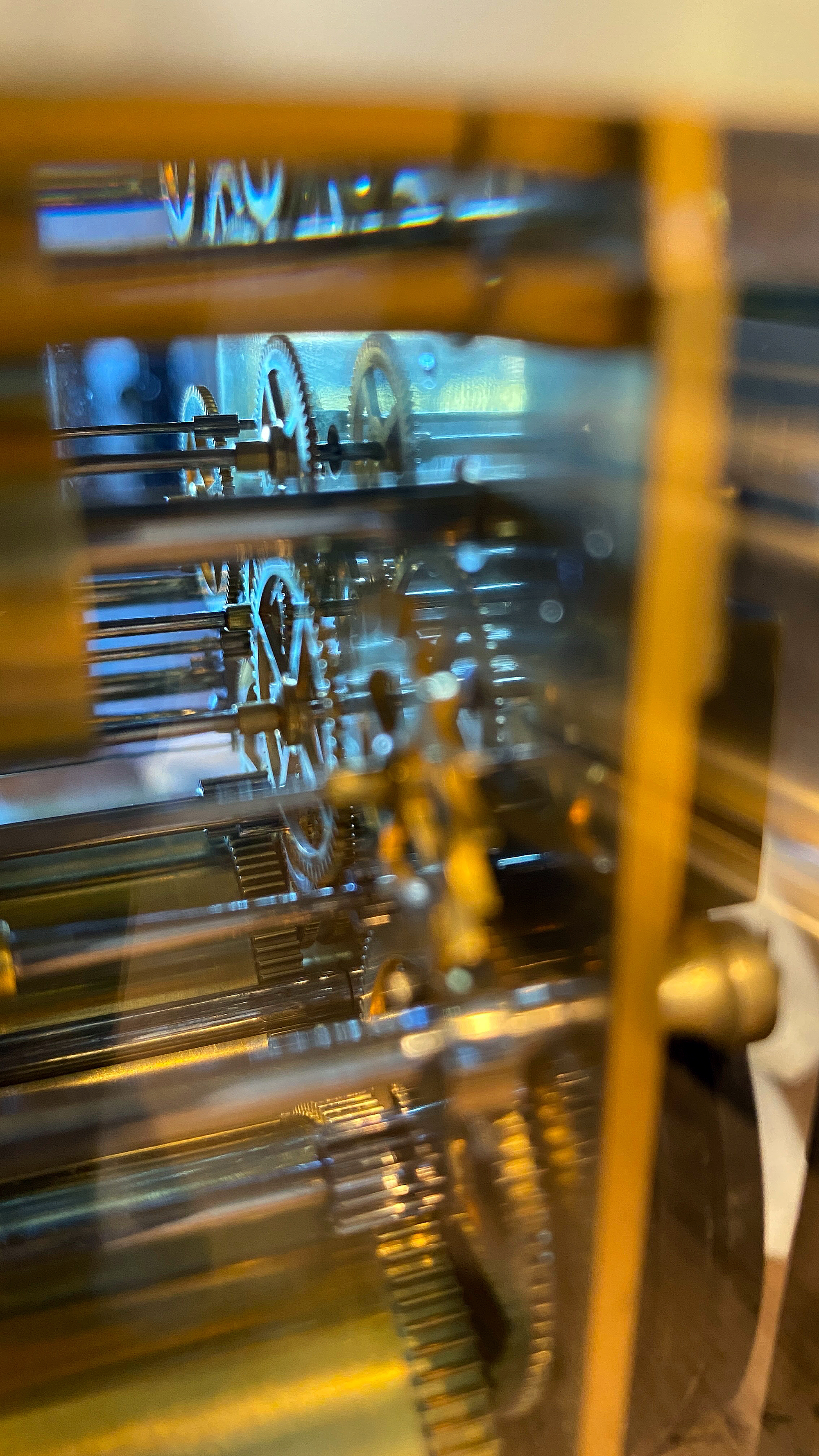